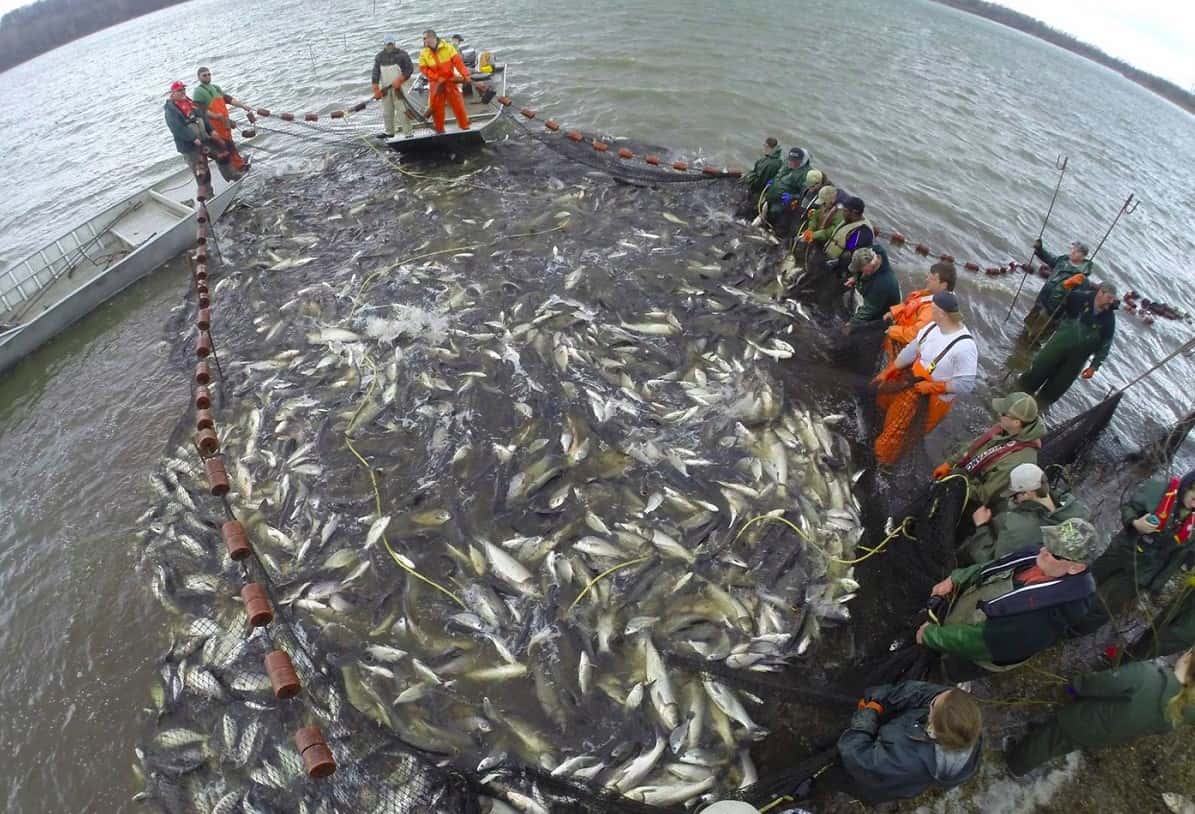 Posted at 21:23h in Uncategorized by Elena Blevins

U.S. Senate Majority Leader Mitch McConnell (R-KY) announced today the U.S Fish and Wildlife Service (USFWS) has agreed to his request to deploy the advanced “Unified Method” of fishing for removing Asian Carp, an invasive species in Lake Barkley and Kentucky Lake. Today’s announcement comes on the heels of Senator McConnell’s May visit to Western Kentucky with members of the Trump Administration, where he discussed options to address the Asian Carp invasion with local elected officials, community leaders and the local media.

One option discussed during the meeting was the “Unified Method,” which involves corralling Asian Carp into one location using electronic technology and extracting the fish from the water with specialized nets. This technique has been successful in controlling Asian Carp populations abroad, and the U.S. Geological Survey (USGS) has successfully deployed it in Missouri and Illinois.

Senator McConnell raised this issue personally with U.S. Secretary of the Interior David Bernhardt, and he also contacted both USFWS and USGS to encourage collaboration between the agencies to bring the “Unified Method” to Kentucky. He urged USFWS and USGS to evaluate this method of harvesting Asian Carp and to offer technical assistance, personnel and equipment in support of both Kentucky’s fishermen and the region’s tourism economy.

“Today’s announcement is a major step forward in Kentucky’s War on Asian Carp. The U.S. Fish and Wildlife Service has answered my call to deploy an aggressive strategy to combat these invasive and dangerous species in Lake Barkley and Kentucky Lake. With coordination among several agencies at all levels, we can help protect Kentucky’s treasured waters, support our boaters and anglers, and bolster Western Kentucky’s $1.2 billion fishing economy,” said Senator McConnell. “As Senate Majority Leader, I’ve worked with local leaders like Judges Wade White and Kevin Neal to bring national attention to this pressing threat in our Kentucky lakes. In the War on Carp, I’m glad that Kentucky is receiving the national attention we deserve.”

In approving his request, U.S. Fish and Wildlife Service Principal Deputy Director Margaret Everson thanked Senator McConnell for his leadership on the issue, saying, “The Service is working with its partners, including the Kentucky Department of Fish and Wildlife Resources (KDFWR), to prevent continued Asian Carp migration. Thank you for your continued leadership and support for collaborative efforts to address the threat of Asian carp in our Nation’s waters.”

“Senator Mitch McConnell went to bat for West Kentucky,” said Judge Wade White, Lyon County Judge Executive. “When I contacted Senator McConnell about the Asian Carp crisis, he took the time to recognize the problem and used his experience and a hands-on approach to bring solutions. The ‘Unified Method’ for removing Asian Carp is an exciting opportunity to make a real impact on this invasive species. If it weren’t for the guidance and assistance we received from Senator McConnell, this never would have happened. I’m looking forward to seeing the impact this method can make and appreciate the attention and real solutions Majority Leader McConnell has brought to the Asian Carp crisis.”

In the recently enacted FY’19 Interior Appropriations bill, Senator McConnell, a senior member of the Appropriations Committee, helped secure $11 million – a $600,000 increase from the FY’18 level – for efforts to combat Asian Carp in the Mississippi and Ohio River basins, including in Kentucky Lake and Lake Barkley.